Initiative 1644 is collecting voter signatures trying to get onto this November’s ballot. People and organizations behind I-1644 on purposely misled well intentioned voters with words “Equality” to mask their true discrimination intend. In I-1644’s petition form, it says “This measure would allow government to implement affirmative action that does not constitute preferential treatment in public employment, education, and contracting in certain circumstances and would define affirmative action and preferential treatment.” However, by Initiative 1644’s own definition: “Preferential treatment” means the act of using either race, sex, color, ethnicity, national origin, disability, or military veteran status as the sole qualifying factor to select a lesser qualified candidate over a more qualified candidate for a public education, public employment, or public contracting opportunity. 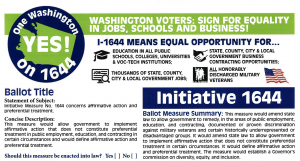 This narrowly defined preferential treatment opens gate for all kinds of discriminations based on race, sex, color, ethnicity or national origin. A perfect example is the Smith vs. UW lawsuit. Katuria Smith grew up in poverty, with an alcoholic father and step-father, and struggled through high school. In spite of this, she was able to pull her life together and submit an impressive application to UW’s law school. However, because she was not a member of a preferred race, Smith’s application was denied. Nath Hentoff at The Washington Post wrote “I asked them what would have happened if she had not revealed her race on her application. If, considering her first name, she had been taken for black, would she – given her academic record and character – have been admitted? The dean said she would have been.” If we allow I-1644 to pass, there will be many hard working students like Katuria Smith been rejected because of her race. As a matter of fact, according to UW’s website, “For thirty years UW admissions decisions have taken race and ethnicity into account (prior to I-200, which banned discrimination and preferential treatment based on race and ethnicity in public education, public contracting and public employment ) ). In the fall 1998 freshman class, about two-thirds of the class-those with the strongest academic records-gained entry on the basis of grades and test scores alone. The remaining third was reviewed and admitted on the basis of several additional factors, of which race or ethnicity was one.”  As our article pointed out, abolishing preferential treatment at UW did not hurt minority students as many proponents of I-1644 claimed.

When I-200 passed in 1998, the initiative was outspent 5 to 1, opposed by big labor and won with almost 59 percent of the vote. It won a majority of men and women. The support was because voters believed that all Americans should be protected from race and sex discrimination when applying for a college education, government job, or public contract. That is the principle that drove I-200 to victory. People and organizations behind I-1644 know that they do not stand a chance if they reveal their true discrimination intend. They packaged the measure as “Equality for Jobs, Schools, and Business”. There will NOT be equality if Initiative 1644 passes. There will be discriminations of all kinds. Hard working man and women, people of all colors, students will be denied equal opportunities to seek prosperity in our wonderful state.

STOP Initiative 1644. I-1644 is for discrimination! Voters deserve to know the truth.

4 thoughts on “Initiative 1644 Is All About Preferential Treatment”