SB 6406 wants to repeal Washington Civil Rights Act (I-200), promotes racial quota and preferential treatment. And it is completely wrong. Mr. John Carlson testified against the bill at the public hearing on Jan. 26, 2018.

“Seattle Indivisible endorsed I-200 to restore the equity in public contracts. When I-200 passed in 1998, the initiative was outspent 5 to 1, opposed by big labor and won with almost 59 percent of the vote. It won a majority of men and women. The support was because voters believed that all Americans should be protected from race and sex discrimination when applying for a college education, government job, or public contract. That is the principle that drove I-200 to victory. Regardless of what party controls government, it is wrong when that government uses different rules for different races. When it comes to state colleges and public employment, racial differences, like religious differences, should be minimized, not magnified. During the I-200 campaign, people said that it would end college diversity on campuses, but there is more diversity today than there was years ago. You do not need racial preferences and set asides to have diversity in our society. Hiring by quota is divisive, toxic, and unfair and there is no need to go back to those days. The more diverse the society, the more essential it is to treat people the same. I-200 stands for a single standard of fairness. ” (source: senate bill report SB6406 )

There have been plenty of evidences that preferential treatment and racial quota hurts Asian Americans’ chance in college admission, graduate school entrance, and subsequently, job and success in this country. Below are few examples. 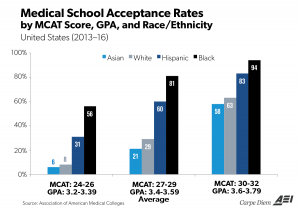 Based on data from over 120,000 applicants, researchers found that “Being African American instead of white is worth an average of 230 additional SAT points on a 1600-point scale. Other things equal, Hispanic applicants gain the equivalent of 185 points. Coming from an Asian background, however, is comparable to the loss of 50 SAT points. ” In other words, Asian American students need to score 280 SAT points higher than African American students to be accepted at elite universities!

If you also oppose SB 6406,  please let more people know about this bill. Please also contact your district senators, house representatives, and let them know that you oppose SB6406.