A Gallup poll in 2016 showed that “Americans continue to believe colleges should admit applicants based solely on merit (70%), rather than taking into account applicants’ race and ethnicity in order to promote diversity (26%). ” 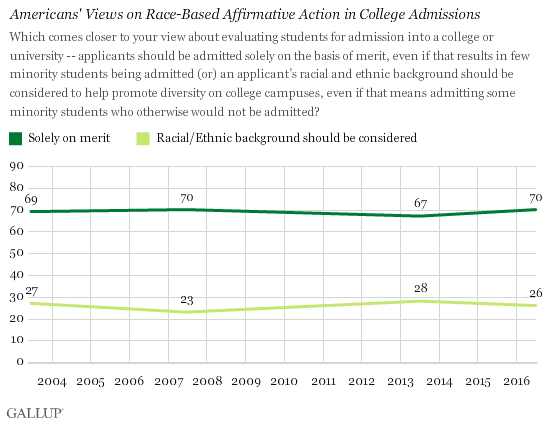 Gallup previously asked this question as part of its Minority Rights and Relations poll in 2003, 2007 and 2013, and Americans’ views since 2003 have held steady.

When asked to rank a list of nine factors that colleges and universities could consider when making admissions decisions, 63% saying race or ethnicity should not be a factor at all in admissions and only 9% saying that they should be a “major factor.” A majority of people answered the poll said that scores on standardized tests and the types of courses a student takes in high school should weigh heavily.