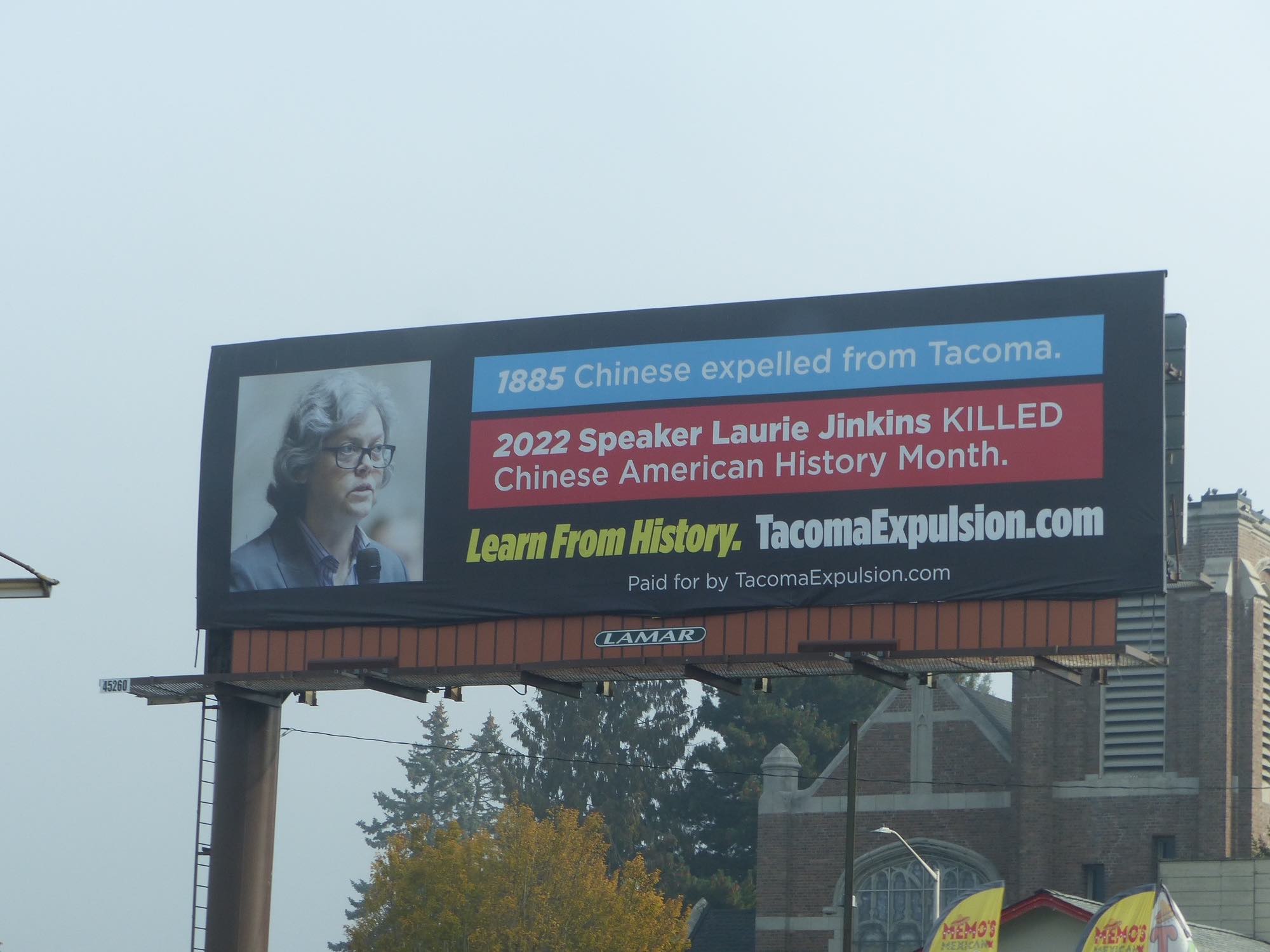 On the Eve of the Anniversary of the Tacoma Expulsion, the third billboard is up in Tacoma to protest House Speaker Laurie Jinkins for killing Chinese American History Month for partisan political reasons.

Bellevue Washington – October 20, 2022 – Another billboard urging the WA Speaker of the House, Laurie Jinkins, to learn from history is up in Tacoma. This time it is right across from a middle school with students who come from the Tacoma Chinese Reconciliation Park neighborhood. On November 3, 1885, Tacoma’s remaining 300 Chinese Americans were forcefully expelled from town. The city later built Chinese Reconciliation Park to commemorate this terrible history of hatred, murder, and repression. The Chinese Reconciliation Project Foundation is organizing a Walk for Reconciliation event on October 29th to remind people of this dark past. “People in the community deserve to know that there was a bill to establish January as Americans of Chinese Descent History Month, and it was killed by their representative, Laurie Jinkins,” said Linda Yang, Director of WA Asians For Equality.

Early this year, SB 5264, a bill that would designate January as Americans of Chinese Descent History Month, passed the Senate 48 to 0, and the House State Government and Tribal Relations Committee unanimously. The bill was later killed by a final 36-hour behind-the-door political maneuvering.

PRA records revealed that Rep. Cindy Ryu sent a chat message to the House Democrat Caucus (HDC) on March 3rd and said “SB 5264=ethnical appropriation”. On March 4th, SB 5264 failed to advance to the House floor before the cutoff, and missed the opportunity to become a law. Ryu’s email to the HDC on March 5th further explained her accusation: “SB 5264 was [c]ultural appropriation, especially when we have Members of Color who could have easily carried this bill”. Seattle radio show host, Jason Rantz, covered this story in his exclusive: Democrat lawmaker axed Chinese Heritage Month because sponsor is white. Rantz pointed out in his story that, unlike Ryu, who is a Korean American, SB 5264’s sponsor, Senator Keith Wagoner, actually has strong ties to the Chinese American community. Wagoner’s wife is “is a naturalized United States citizen from Taiwan, who is Chinese”. Yang’s group met one of Senator Wagoner’s daughters, who is American-born Chinese. They instantly connected. “To us, as the son-in-law of a Chinese family, Senator Wagoner is part of the Chinese American community,” Yang said.

A Democratic House Representative from the 48th was willing to sponsor SB 5264 the following year. Then, after Cindy Ryu labeled the bill “cultural appropriation” because Ryu thought the bill’s sponsor was not “people of color,” this representative balked and told her constituents, “Rep Ryu is the person you should speak with first.” The 48th LD is one of the few minority majority districts in WA, with a large population of Chinese Americans. When asked about their reaction, Yang said, “Yes, we are disappointed. Elected officials are in Olympia to represent the constituents of their district and carry bills for their constituents, regardless of race or ethnicity. “

The Chinese American community mailed a letter to every member of the HDC during the summer. In the letter, they expressed their willingness to work with HDC members and have an open and respectful dialog on policy matters of concern. To date, only one member has met with them.

A small number of HDC members have been insisting on moving the month from January to May. In Ryu’s amendment to SB 5264, she asked to “strike ‘January’ ” from the bill. The Chinese American community disapproves Ryu’s move. 6th-grade student Emily Shi pointed out, “If Americans of Chinese Descent History Month is conjoined with AAPI Month, there will be no use for Americans of Chinese Descent History Month… the result will be the same as the current situation and won’t make a difference.”

A national contest was held for student essays to accompany a petition to the legislature on the matter.  11th-grade student Lucy He said in her essay: “The particular month of January especially holds historical, social and cultural importance.”

10th grade student Sammi Wang wrote in her essay “”[t]his very train of Chinese American history tumbles through time, retracing back to dates of shame, humiliation, and unity- and the rails ran most in January,” citing many historical events that happened to Chinese Americans in the month of January.

To Yang and the supporters of SB 5264, it is critical that the WA Legislature respect the Chinese community’s will by designating January as the commemorating month. They vowed to fight on with a stronger force if Speaker Jinkins and House Democrat Leadership continue to allow what the Chinese American community perceives to be a small group of legislators who have no ties with them to take away their wishes and decide for them.